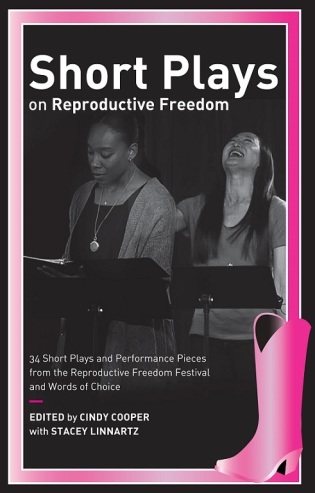 Read a short description of each piece

We’ve joined with Social Justice Tours to offer a tour on reproductive freedom and history in New York City with our Reproductive Freedom Walking Tour through Lower Manhattan.

An Article: Taking the First — and Only — Reproduction Tour in America
by Leah Feiger

Listen as WNYC’s Alejandro Salazar walks with us!

“I had such a great time and learned a lot both on the tour and talking with you afterwards.”

“I am really glad that I joined in this great tour to learn more about NYC and American histories on reproductive health and freedom. It is very knowledgeable, memorable and insightful. I am inspired by those brave women who fight for women’s rights. No matter how hard it is we should not give up.”

“Thank you very much for the wonderful tour.”

“What a great tour!! Thank you for this informative tour of Reproductive Freedom in Lower Manhattan. While this will always be an important tour, the timing of it is perfect, given what recently happened in Alabama. [Our tour guide] was lovely and so knowledgeable about the fight for reproductive health and justice. She does an awesome job in connecting the past and the present. Also, 10% of the payment for the tour goes to the New York Abortion Access Fund. This is a highly recommended tour!”

“Thank you for the powerful tour! Great meeting and learning, and inspiring the impressive group of people who assembled yesterday.”

Thanks again for a great afternoon and tour!

Read a blog about the Walking Tours.

Coming from Massachusetts to walk with us in New York! 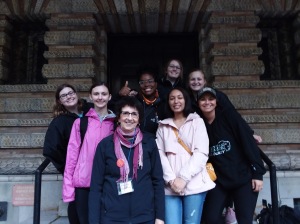 Read bios of the readers!

If you missed the event, ORDER AT AMAZON

Read a short description of each piece

REPRODUCTIVE FREEDOM IS WHAT WE WANT …!

Performance followed by a discussion with Farah Diaz-Tello, a leading attorney on reproductive justice working with If, When, How, and Lanai Daniels with the New York Abortion Access Fund.

See the full program on our blog.

Listen to WBAI’s Joy of Resistance.

100% of proceeds will be donated to New York Abortion Access Fund. 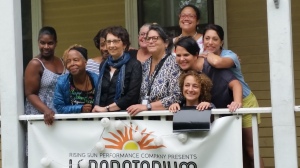 Eight actors, four writers, one director: creating new works in a week-long residency experimenting with the Living Newspaper and concentrating on women’s* issues (women and women-identified).

Read more about this project here and here.

For women and mothers reintegrating with the community post-prison 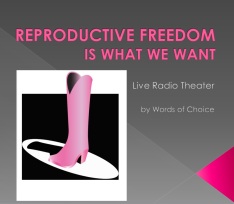 with the International Women Artists Salon Radio and Heidi Russell

1-Incantation by June Jordan  (all)
2- She said – before 1973 by Judith Arcana (all)
3-Nobody by Esosa Edosomwan (Crista)
4-Fine Line  (Julissa)
5-You’re On Your Own by Michael David Quinn  (all)
6-Parallel Lives by Kathy Najimy and Mo Gaffney, intro by Angela Bonavoglia (Claudia, Crista)
7-Siege by Susan Wicklund adapted by Cindy Cooper (Claudia)
8-Laws I Want by Words of Choice  (all)
9-Why I March by Zoneziwoh Mbondgulo-Wondieh  (all)

Read a wrap-up of the event.

The International Women Artists Salon at Dixon Place in NYC

Screening with the UK Festival of Choice

Visit our Reproductive Justice Walking Tour site!
and see more on this page. See our video for a virtual walk! (Or to do your own!)

Putting reproductive justice on the map in our lives, our history and our communities.

-A guided walk with a dozen performances through lower Manhattan
-A Roundup and Fair with interactive events, more performances and refreshments

Follow up Blog: Putting Reproductive Justice on the Map 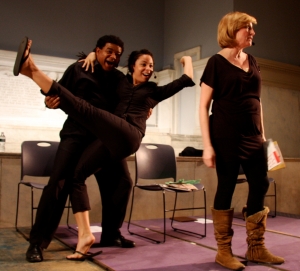 Read about the first-ever WiredArtsFest on ABC here and Wall Street Journal here.

Cindy Cooper on her Play, “Words of Choice,” Reproductive Justice and Body image in Adios Barbie

Read about Words of Choice in BUST Magazine

Sponsored by the Reproductive Justice Committee and Social Responsibilities Council of the Unitarian Society of Ridgewood, in partnership with the Ramapo College Women’s Center.

Words of Choice I as published in Frontlines
Produced and performed by The Brazen-Faced Varlets of Buffalo
Directed by Kelly M. Beuth
at Hallwalls Contemporary Art Center, Buffalo, New York
Production made possible by The Pro-Choice Foundation of Western New York, with support from Buffalo Womenservices; benefitting Planned Parenthood of Western New York.
Read more about the cast and company.
See the Buffalo flyer HERE!

JULY 31, 2011
Summer of Trust and Summer of Choice.
Germantown/Gaithersburg, Maryland
Read on our BLOG.
Featuring a special New York cast including Carl H. Jaynes, Stacey Linnartz and Krystel Lucas under the direction of Francesca Mantani Arkus.

Click here to view posters and materials from previous performances.